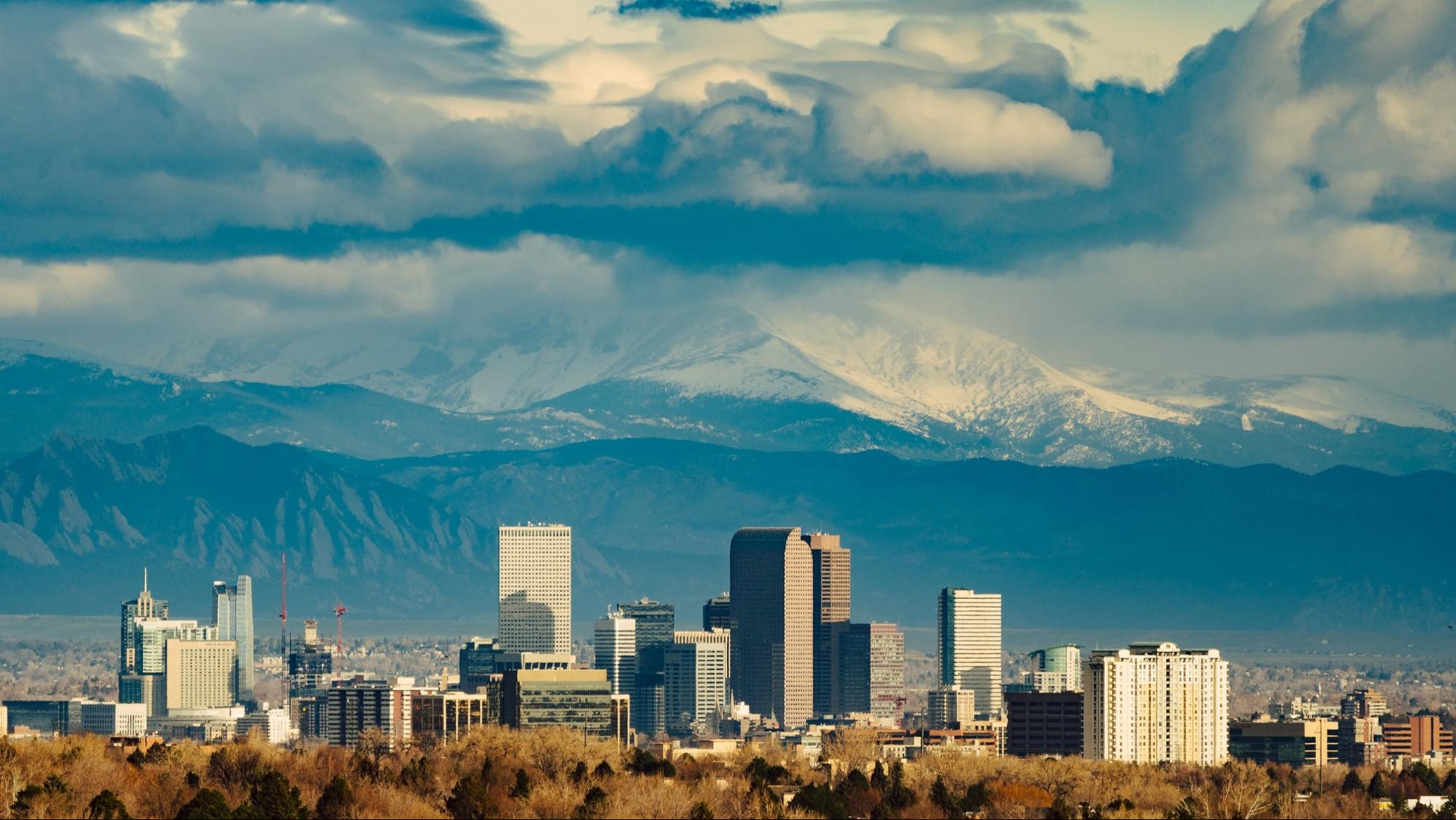 Building on our work in 2019, RadicalxChange Foundation partnered with the State of Colorado to facilitate several cutting-edge applications of Quadratic Voting (QV) in 2020. This short blog post shares that work with the broader RxC and QV communities and fans of democratic innovation more generally.

Before diving in further, we’ll begin with a short introduction to QV. Those of you already familiar can skip ahead.

QV in a Nutshell

QV is a redesigned voting method reflecting the intensity of people’s preferences in collective decisions. Based on insights from game theory and mechanism design, it mitigates tyranny-of-the-majority and factional control problems.

Voters receive budgets of “voice credits,” which they allocate to different questions on the ballot to signal the intensity of their conviction. Their voice credits convert to “counted votes” according to their square root. So if you put one voice credit on an issue, that is one vote; four credits are two votes; nine credits are three votes, and so on.

Why is it interesting? When groups need to make decisions involving many different issues, it is useful to enable each voter to express where they are more or less passionate. However, most ways of letting voters express preference strength make it too easy for the “loudest voices” to prevail. QV specifically and elegantly addresses that problem. It incentivizes voters to be honest about how strongly they feel, ultimately helping groups reach more nuanced compromises. For an explanation that goes into more depth (and deals with QV variations not applied in Colorado), check out this recent video.

Working with RadicalxChange Foundation and Democracy Earth Foundation, the Democratic Caucus of the Colorado State House of Representatives conducted the state’s first experiment with QV in Spring 2019. After weeks of discussions with no clear conclusions, they used QV to prioritize a handful of several proposed spending bills that drew upon their limited budget. The vote resulted in a clear prioritization of the budget bills in question, giving Caucus leaders a more informed and nuanced understanding of what the group supported. 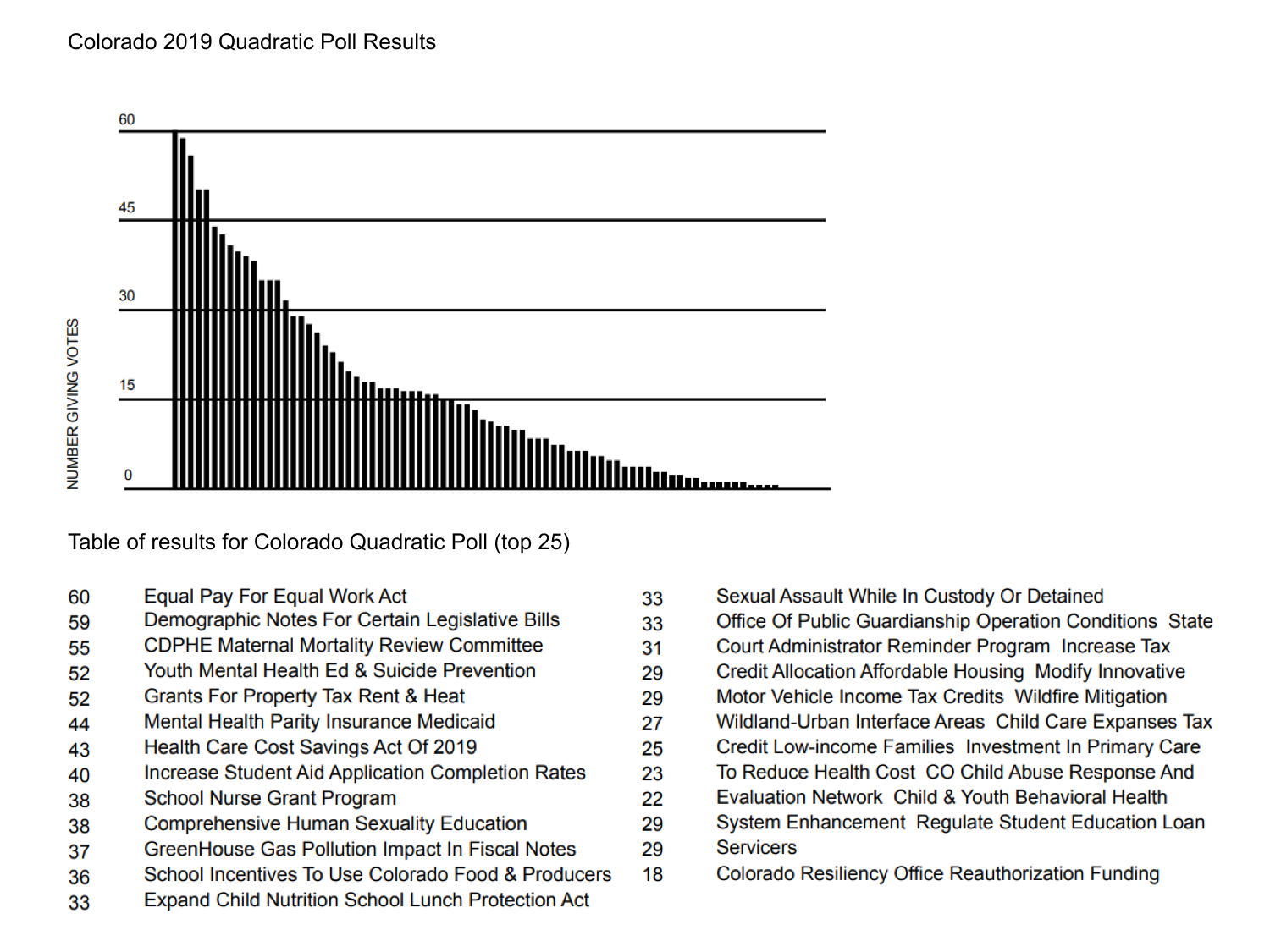 Among other sources, you can read up on it in this related article by WIRED magazine.

From Legislative to Executive Branch

Following this successful pilot, in June 2020, officials in Colorado’s executive branch decided to bring QV into a new context. As part of an effort led by Ben Henderson and Hana Sayeed from the Governor’s Office of Operations, RadicalxChange Foundation implemented a process by which interagency working groups used QV to prioritize their yearly goals.

The process began with a test vote on a moot issue – favorite Colorado sports teams – to familiarize the voters with QV. Then, working group participants had an opportunity to argue and hear arguments for different proposed ‘20/’21 priorities. Finally, they used live QV ballots to help determine what the group felt most strongly about.

QV in Other Decisions

Seeing the benefits of the process in these interagency groups, several agency leaders began using it for group decisions in other contexts.

Two examples of this are that a) Colorado’s Department of Higher Education adopted QV to prioritize its budget expenses. And b) a cross-agency taskforce for behavioral health, consisting of ten public and private agencies, tabled 19 proposals and, in doing so, identified strong support for one of them: forming a new state agency for behavioral health. The Governor ultimately endorsed that decision, and now the Behavioral Health Administration for Colorado is in development.

The pandemic created enormous challenges for Colorado’s citizens and government, but QV helped Colorado more nimbly respond to them. It proved a useful way to structure decisions involving complex tradeoffs, and it appears likely that it will remain a vital tool for state governance.

In some of the decisions taken with QV, the results of the interagency votes were not ultimately adopted by the Governor’s office. This was disappointing for some participants and points to unavoidable challenges around using democratic systems to make decisions when the final authority rests elsewhere. When circumstances permit, and everyone is comfortable with the process, it makes sense to delegate binding authority to quadratic votes.

It is already easy to run a small-scale QV process. For example, the Colorado executive branch performed QV with basic spreadsheet templates from RadicalxChange Foundation. Other easy tools are out there, such as the web applications quadraticvote.co and qv.geek.sg.

There are huge hopes for technological imagination in this space. Next year, for example, RadicalxChange Foundation will work on QV pilot projects in Brazil. The projects aim to adopt a robust and accessible identity verification process so that large-scale communities in Brazil and beyond can start using QV to make meaningful democratic decisions, just like Colorado’s government.

All in all, it’s excellent news that many Colorado officials are developing practical experience using QV to advance democratic processes. One day, the Colorado government might mark the history books as pioneers of radical democracy.

Feel free to contact the RadicalxChange Foundation for any QV related matters, including consultancy work related to democratic innovation and institutional design.