The RadicalxChange movement is about advancing and refining a sweeping, ambitious vision for how society might better organize itself.

Inconveniently, this vision is hard to explain quickly and comprehensively. In truth, to really “grok” the movement, it’s currently necessary to sift through quite a bit of content, including blog posts, academic papers, recorded talks and podcasts, and perhaps a few chapters of Radical Markets.

Complexity is sometimes unavoidable. Nonetheless, our ideas are presently a bit too time-consuming to approach, and we need to do more summarization and translation.
To this end, I am going to try to articulate RadicalxChange’s vision in a single short document, aiming to introduce the unfamiliar, and also answer some questions that I frequently receive.

I will start by sketching a couple problems, then discuss RadicalxChange’s ideas about how best to address them, and conclude with a brief description of the world RadicalxChange wants to create.

Our social, economic, and political systems all depend on the idea that people are getting more or less what they deserve. And while perfect fairness is an unattainable ideal, people suffer and societies grow unstable when things become dramatically unfair. We’re seeing that now.

RadicalxChange has a vivid perspective on the unfairness of our economic institutions, which lies at the core of our approach.

The value of land provides a helpful illustration.

Why does land increase in value over time, for example in cities? The answer is that many people living and working geographically close to that land are continually laboring to create a more appealing and productive society, to which the land affords convenient access. Yet, only the owner of the land gets to enjoy the increase in the land value. In fact, increases in land value hurt nearby residents who don’t themselves own land. This means that the residents of a city get less value than they created by their labor, while land owners get more value than they created by their labor. Private property in land thus institutionalizes an unfair way of divvying up the value that a society generates. 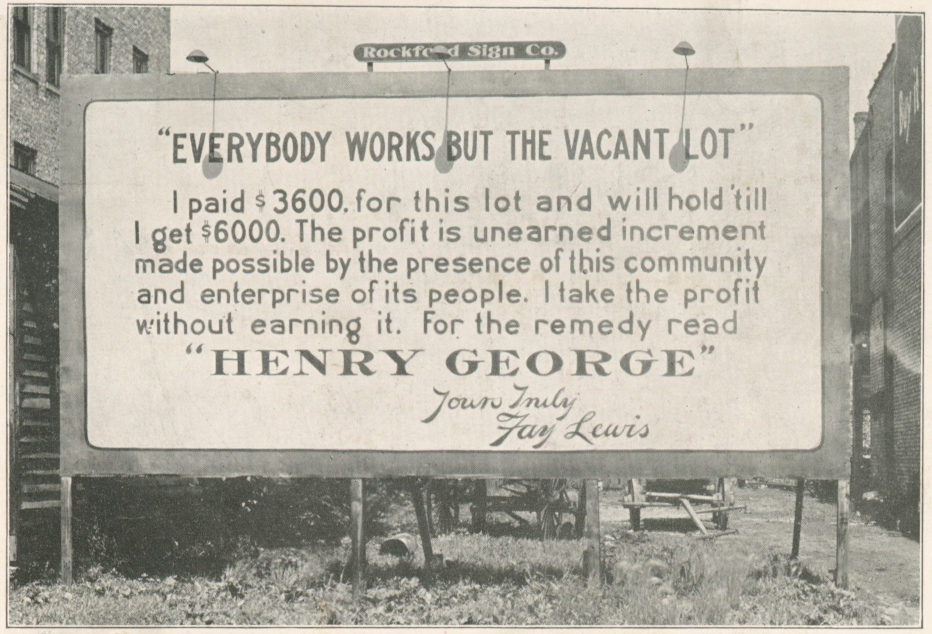 Henry George observed this dynamic in the late 19th century. His insight was deeply influential for some of the best social and economic thinkers of the early 20th century, such as John Dewey. But this way of thinking about economic justice went out of style in the U.S. around mid-century, as the U.S. became consumed by a simplistic capitalist-versus-communist conversation. Meanwhile, other countries, such as those in Scandinavia, continued to be influenced by Henry George’s way of looking at things.

As I said, this is not just about land. The Georgist insight can be generalized to illuminate unfair dynamics in many different economic situations. In short, the fundamental problem arises when private property allows private parties to capture the value generated by widespread network effects. Network effects are the reason that Manhattan real estate is so valuable: the presence of so many people in close proximity makes it a highly productive place to live and work. But a very similar process occurs when a technology company controls a network that hosts huge quantities of diverse activity, or where a monopolist corners an industry.

Urban landlords, tech platforms, and industrial monopolists alike find themselves in a position to take more than their share of the value created by society. This means others are getting less than their share, and it is wrong. It leads to societies poisoned by unfairness and distorted by bad incentives.

At this juncture, one might anticipate that RadicalxChange proposes to place assets under government control, so that “society” may enjoy the value “society” creates. But when you look at power concentration as a general, structural problem, rather than a problem exclusive to the private sector, the danger of highly centralized remedies become clear. In many societies, governments are the worst rent-seekers of all. We suspect that many who propose to solve injustice by placing more assets under government control are grasping at short-term solutions and underestimating the probability that their governments will misbehave in the medium or long term. Moreover, government power concentration is in many respects more dangerous than private power concentration, because no authority above government can pump the brakes if things go terribly awry. Government power is not always bad, but treating it incautiously is the first step on the road to totalitarianism.

The usual rejoinder to this worry is that (some) governments, unlike private parties, are subject to democratic control. Democracy would indeed assuage our worries, if we were not also deeply worried about the health of democratic institutions. Unhealthy democracies have a habit of transforming into non-democracies.

That’s why RadicalxChange is focused on basic, source-code-level institutional reform. Just as we need to update the flawed 18th-century economic institutions that allow private parties to capture the value of other peoples’ work, we need to update the flawed 18th-century democratic systems that lead to democratic dysfunction, such as apathetic majorities outvoting engaged minorities and narrow interest groups outmaneuvering vast majorities. Better-designed voting systems could reduce the probabilities of these bad outcomes and thereby reinvigorate democratic participation.

Moreover, institutions that we now think of as “private” should in many cases be subject to much more meaningful forms of democratic control. In both the private and the public domains, we see an urgent need for more democracy and less concentration of power.

RadicalxChange spends a lot of time talking about “mechanism design”. Mechanism design is a field of economics that bears a strong resemblance game design. It looks at how to design rules and incentives that minimize the strategic rewards for undesirable actions, such as dishonesty. “Mechanism design” is actually a rather unfortunate term, because it sounds, well, mechanistic. In fact, RadicalxChange’s approach to mechanism design is all about encouraging and invigorating social interaction and participation in institutions. A key theme is cooperation across difference. The more democracies depends on thick shared cultural understandings, the more brittle they are in the face of pluralism. We must think not only about how to build shared understandings–although that is very important–but also about how to better cooperate and collaborate in self-governance with people whose worldviews fundamentally differ from ours.

This is not the place to go into the technical details of our mechanism design ideas, which you can read about elsewhere. Suffice to say that we think variations of relatively new mechanisms such as Quadratic Voting, Quadratic Finance, and Common-Ownership Self-Assessed Taxation have the potential to remediate the issues above by improving incentives associated with voting, public goods funding, and the administration of private or common property rights. All these designs incentivize (1) public information disclosure and (2) internalization of externalities imposed on other participants in the system.

We are involved in research in technical areas that might enable the extension of some of these mechanism design ideas into particular applications, such as improving public procurement processes. We also support technical work concerning individual and group identity. We believe technical progress in the latter area will enable efficient, fair mechanisms to power a new generation of fair and efficient collaboration platforms in both the public and private sectors. While eschewing anything that could be called “collectivism”, we firmly believe that new ways of formalizing group and community identity will enable us to move beyond the outdated conceptual straight-jacket that posits “individuals” as the sole units of value creation and the sole constituents of a democratic system.

Values that run through all of our ideas include:

A major theme, then, is that society is littered with harmful power concentrations that we need to intelligently and honestly address. The power concentrations in politics and economics have close parallels in other fields of life. These include, for example, the warrantless power differentials between people of different races, genders, nationalities, and sexual orientations. Also worrisome are the concentrations of professional power in various fields of endeavor, such as academia, technology, and the arts. RadicalxChange seeks to challenge these dynamics by convening diverse groups at its events and conferences. We hope that people from different backgrounds, fields, and walks of life will learn from each other as much as they challenge each other–that they will strive to speak to new audiences and acquire knowledge in unconventional settings.

One need not squint too hard to imagine a very exciting possible future that synthesizes various RadicalxChange ideas.

In this possible world, economic value and political power would be shared much more widely. Broad-based cooperative ventures would be easier to organize and more efficient to manage. Fewer people would be sidelined and discouraged from participating in economic or political life. Consequently, people would be happier, and the sum total of human intelligence applied to the problems of social life would be greater. Lots of institutions would be more local and decentralized. A few might still be centralized, but these would be much more responsive to their constituents, and subject to more vigorous democratic oversight.

Crucially, it would not be a utopia, or anything particularly close. It would just be a fairer, more engaged, and less lopsided world. That’s worth working for.