Whatever their differences, there seems to be broad agreement that we’re in a moment of political flux and that the debates of today are unlikely to persist in the coming decades. Some see an inevitable future of world-spanning super-intelligences and others radical crypto-powered decentralization. But you don’t have to embrace such determinism to believe (like Yuval Noah Harari) that only ideologies that have a coherent vision of the future of technology (just as Fascism, Communism and Democracy did in the 20th century) are likely to thrive.

A natural place to look for candidates for such technology-ideology pairs is Sid Meier’s Civilization, the best-selling strategy game of all time. The game has usually featured a variety of types of government to choose from: for example, in the Classical era Oligarchy, Classical Republic or Autocracy. Yet the latest expansion of the latest iteration of the game (Gathering Storm for Civ VI) projects into the future, offering a choice of Corporate Libertarianism, Digital Democracy, or Synthetic Technocracy.

Without taking a computer game too seriously, there is a logic to the way they carve up ideological space. In this document, I take their thinking and run with it, attempting to be fair to the self-understanding of each group and thus to welcome collaboration and critique from those who feel they generally identify with the camps. At the same time, I primarily wrote this document, and no one will be confused about which camp I identify with; last week I released something of a mission statement for Digital Democracy/Plurality/pluralism. As with any classifications of political beliefs, most people will find themselves somewhere in the middle of these groupings (as pictured in the diagram below) and many will find that even the space spanned by them captures only some elements of their views. Nonetheless, I believe classification is useful to allow those outside these debates about the future of governance an entry point into them. Debates about a distant future are often confusing and obscure, so I hope this may help simplify them. 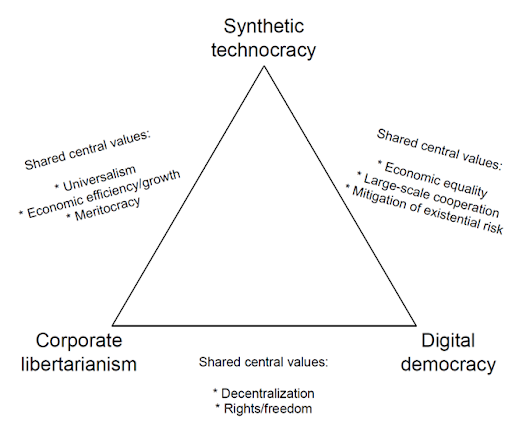 Description: Corporate Libertarians see digital technology as a pathway to liberate individuals from dependence on bureaucracy, collective organization, and coercion. They see cryptography and algorithmic coordination protecting of “negative liberties” of, e.g., speech and property untraceably, preventing collective sovereignties from impeding their exercise. They admire the transformative potential of entrepreneurial founders and hope to extend their domain to those usually covered by politics, like cities or nations. They view the decline of pre-digital social institutions (e.g. nation-states, “legacy” corporations”, unions, etc.) as inevitable, desirable and imminent. They see financial relationships, mediated by capitalist markets and based on profit, as the future in most domains.

Civic that unlocks it in Civ VI: Venture Politics

Canonical texts: The Sovereign Individual by Davidson and Rees-Mogg, “Silicon Valley’s Ultimate Exit” by Srinavasan, Unqualified Reservations by Moldbug, Zero to One by Thiel with Masters, The Jacobite, Snowcrash by Neal Stephenson, Declaration of the Independence of Cyberspace by John Perry Barlow

Relationship to Silicon Valley tech scene: Accelerationist/ambivalent for lack of commitment to their strength.

Future of art: NFTs, art as object of economic value

Description: Synthetic Technocrats expect the arrival of Artificial General Intelligence (AGI), machines that outperform humans on all economically relevant tasks at minimal cost, in the coming decades. They believe it will effectively end economic scarcity and the need for most humans to work. They see the major problems of social organization as both achieving this outcome quickly and reckoning with the risks it poses, especially the potential existential threat of misaligned AGI objectives and the maldistribution of the economic abundance AGI enables. They view the solution to these problems as technical in nature and hope adequate solutions to them will help resolve a range of other existential risks, especially those related to interpersonal human conflict. They see science and technology as the path to solving most problems.

Civic that unlocks it in Civ VI: Optimization imperative

Description: Digital Democrats locate the promise of digital technology in its capacity to empower the peaceful coexistence and collaboration of diverse and distributed communities. They center socio-technical systems (patterns of connections between tools, culture and political economies) over purely technical ones and thus celebrate a range of technologies serving democratic social organization (e.g. VR as a path to empathy, statistical text summarization to empower large scale deliberation, new political economic mechanisms that encourage cooperation). They seek to proliferate and diversify sites of social cooperation, while cooperating with and strengthening “legacy” loci of legitimacy. They seek a future managed by a diverse range of democratically governed communities cooperating in a subsidiary manner across scales.

Civic that unlocks it in Civ VI: Distributed sovereignty