The Netflix documentary, The Social Dilemma, has triggered a new public debate about the internet’s impact on society. It casts a good spotlight on how privately-owned social networks manipulate peoples’ behavior and weaken democracy by boosting attention-grabbing, polarizing content.

We believe that the maladies depicted by The Social Dilemma are just some of the symptoms of a more profound problem. Just as private property in land and people once permitted small privileged classes to control entire populations, the laws currently governing the data economy systematically disempower everybody except for the handful of companies that assemble and process the most information. With power over public discourse and individual behavior so grossly concentrated, neither democracy nor markets can function normally - this will remain the central impediment to open and democratic societies until we solve it.

Almost everyone, from privacy czars to cyber-libertarians, seems to agree that something is wrong in the data economy. But the RadicalxChange community is developing a distinctive diagnosis with corresponding solutions.

Familiar ways of looking at the data economy tend to focus on the wrong agents or place authority at the social stack’s wrong levels. To illustrate: One mistake is to ask government regulators to dictate what companies may and may not do with, for example, the data gathered on social networks. That fails because it demands that regulators have superhuman knowledge. Some individuals may desire to share their data far and wide or even sell it, while others may wish to keep it intensely private. A majority probably have partly-formed, context-dependent, and complicated ideas about how their data should be used. Moreover, our decisions about our data really matter. Regulators cannot handle them for us.

Another trap, however, lies at the opposite extreme. It is tempting to say that individuals should have total control over their data - this sounds great, but it is impossible. That’s right! It is not merely hard or complicated: It is impossible. This assertion can seem puzzling, but the reason for it is simple, once you see it: My data is also other peoples’ data. For example, my email box contains thousands of messages that also exist in other peoples’ email boxes. If I have total control over my data, that means I can share those emails with third parties. But if I do that, then the folks on the other end of my emails don’t have total control over their data: I get to disclose it to third parties without asking their permission.

You might object that emails between two people are not personal data – they have already been shared with someone else so that neither person can count them as their data. But then what is? It is surprisingly hard to think of any information that only concerns one person. My personal preferences are correlated with those of my friends because we have influenced each other. My genome, perhaps the thing most specific to me, is full of information about my parents and cousins. Information is always interpersonal. Our identities are part of networks.

The false idea that our information “belongs to us” is precisely what got us into the Social Dilemma. In the status quo, we can and do all reveal vast amounts of information about our friends and family to the internet companies whose platforms we use. Our friends and family are then forced into the same system. It’s a race to the bottom, where only the giant monopolies win.

The world we live in: Big Tech stocks are at an all-time high, while the traditional economy is contracting. The momentum of data-economy-driven financial inequality is accelerating. Soon, improvements to artificial intelligence might lead to even more imbalance. But remember – the machines depend on the data that we and billions of others have already fed into them! Their lifeblood is our information. It will be a tragedy if only the collectors of data, and not the people whose data they use, wield that power.

So we don’t want our data to be controlled from the top-down by state regulators who are unlikely to get these critical decisions right even if they are well-intentioned. Likewise, we can’t handle data individually because data is never really “individual”.

Control over data – which means at the same time, control over the social networks that have distorted our societies and the intelligent machines that might take our jobs – has to be shared. In other words, decisions about data need to be taken democratically. 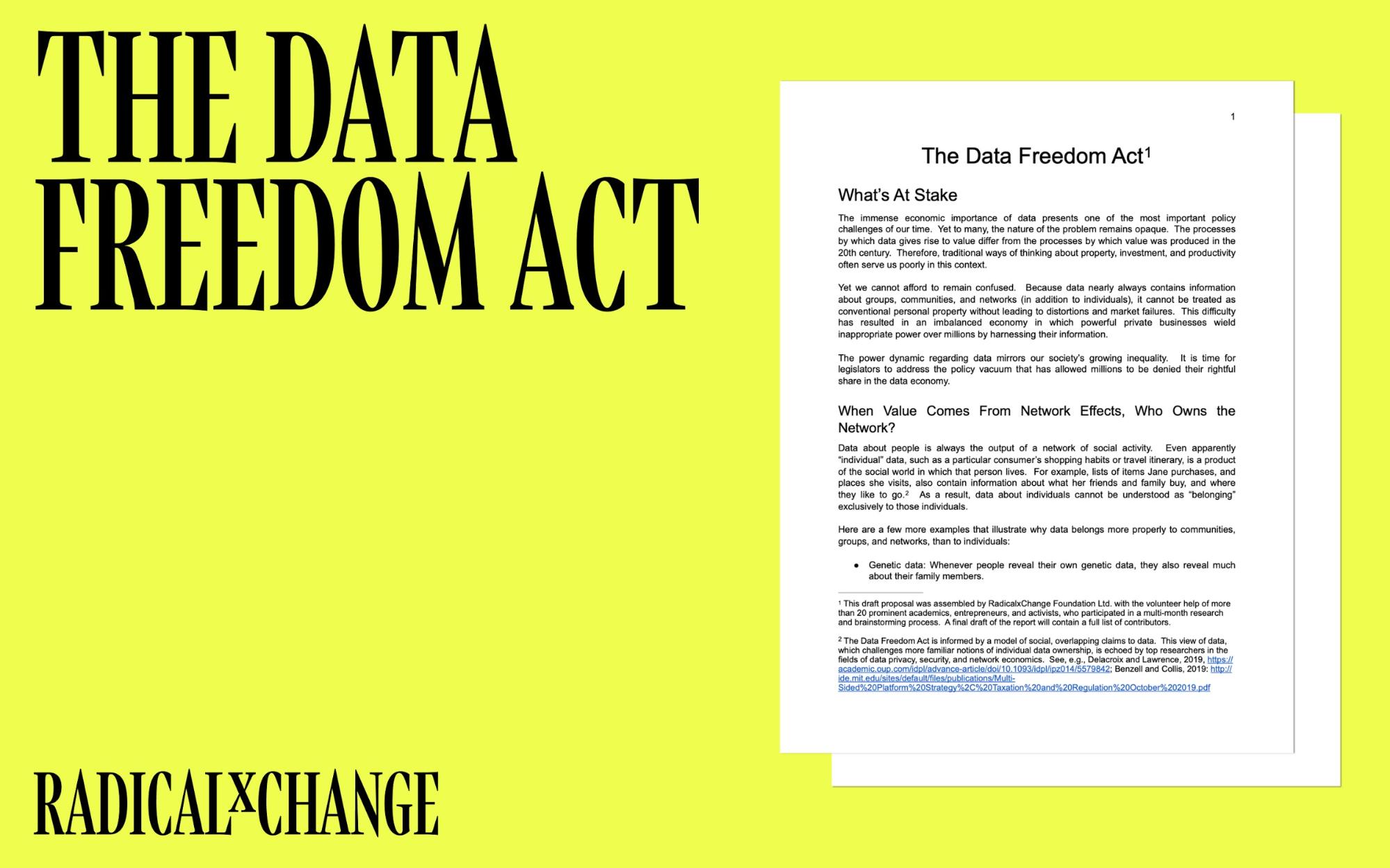 In 2019, RadicalxChange Foundation sketched a legislative concept to end this cycle: The Data Freedom Act. At its center is collective bargaining.

To be sure, just like governments, the power of collective bargaining entities is susceptible to corruption, so they need to be closely monitored. But collective bargaining is precisely the right tool for this problem. First, it permits people’s spontaneous organization into groups of common interest, making democratic decisions. Second, it redistributes money and power from the wealthy owners of capital to the many people they depend upon.

Imagine a world in which the big technology companies couldn’t merely vacuum up your data directly but had to bargain for the right to use it, with representatives bound to represent the interests you and many others have expressed through a democratic process. That’s the world we want to live in. Indeed, it’s the world we think we need.

The development of data coalitions requires creative collaboration across multiple disciplines. Data coalitions need legal containers, technical means for the exchange of data, funds and internal political power, and, most importantly, public awareness and, in turn, people to join forces for collective bargaining.

Good examples of projects working in that direction are the Data Dividend Project, Ocean Protocol, Streamr, and Swash.

Not all of these projects embody the precise vision RadicalxChange is sketching. We think that’s ok – we need to start somewhere and keep debating details as we go along. Scholars like Sylvie Delacroix and Neil Lawrence, who have pioneered the idea of Data Trusts, are also pushing things in the right direction. A recently-leaked draft of legislation at the European Union revealed that education efforts along these lines make a difference. But it will take a mass movement to push things over the line. That’s why popular media such as The Social Dilemma is so essential.

Another thread worth following is the recent backlash from the United States House of Representatives against the monopolization of Big Tech. In early October, its antitrust subcommittee published a 449-page investigation about antitrust considerations in connection with the high technology giants, in particular Facebook, Google, Amazon, and Apple. The US legislators’ conclusions point towards structural separation, line-of-business restrictions, and limits on competition between interdependent firms. Such measures might intensify competition in the high technology scene, possibly reducing the network-effect-driven bargaining power of Big Tech and indirectly paving the way to more effective collective bargaining for data.

How You Can Get Involved

RadicalxChange Foundation aims to further the Data Freedom Act’s thinking and find more partners to collaborate towards data coalitions. If you have any ideas or questions in this direction, please drop us an email at info@radicalxchange.org.

Encourage your family, friends, and coworkers to watch The Social Dilemma. Engage in follow-up discussions and point them towards the Data Freedom Act and the RadicalxChange community.

Tell your friends why fixing the data economy is so important, and get involved!

Starting in January 2021, the RadicalxChange fellowship program will host its first 10-week cohort, bringing together mission-driven individuals and teams to work collectively on projects to strengthen civil society and rethink public goods. Selected fellows will come from all sorts of endeavors, such as activism, art, design, entrepreneurship, investing, policymaking, research, and technology. If you are working on data dignity, the fellowship is an excellent opportunity to get public exposure and meet outstanding mentors and peers working on similar projects.